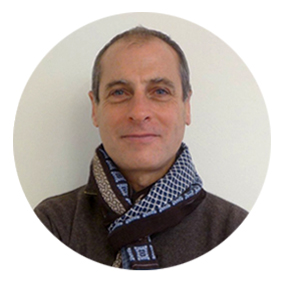 Fernando is from Toledo, the historical capital of Spain. He joined the Hispaania Maja team in January 2019 and gives private and group lessons to children and adults. He started his career as a journalist, but later discovered a teacher in himself. For the last 12 years, he taught history and Spanish in a school in Spain and in 2017 he specialized in teaching Spanish as a foreign language. Estonia has a very special meaning for him, as it is the first place abroad where he is helping people to learn Spanish.

Most of Fernando’s free time is dedicated to his passion of cinema – and not only to watching films, but also yo being behind the camera. He is namely the cameraman and editor of several Spanish short films and documentaries.


Education: Complutense University of Madrid (Bachelor’s degree both in journalism and education), International University of La Rioja (Master’s degree in teaching Spanish as a foreign language)


Other languages he speaks besides Spanish: English, Russian, French


Why learn Spanish? “​The reasons are endless, but at least three of them should be pointed out. First, in a literary sense, Spanish is a fascinating and rich language. Second, it is the most spoken language worldwide after Mandarin and English. Third, when travelling in Spain and Latin America, it gives you a chance to get to know the culture and the people even better.”