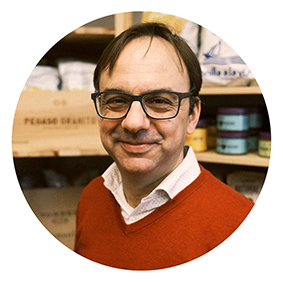 Neftalí is the heart and soul of Hispaania Maja. He’s both Andalusian and Flemish, which could explain why he cherishes and chose Estonia over all other places in the world. Neftalí founded Hispaania Maja in 2009, after working as a professor in the University of Tartu. He is in charge of running and improving Hispaania Maja and gives private lessons both in-house and in external companies. He also organizes a yearly training of trainers “Jornadas de ELE junto al Báltico” directed at Spanish teachers from Estonia, the Baltic countries and beyond.

Besides teaching, Neftalí is devoted to bringing the rich Spanish culture closer to Estonia. One of the tastiest examples is the street food initiative Paella Maja, offering the possibility to try one of Neftalí’s paellas at festivals or to order them from private events all over Estonia. In 2013 Neftalí, together with Kino Artis, organized a Spanish film festival which grew into Iberofest, which takes place in March every year and brings a great deal of Ibero-American culture to Estonia.


Education: Spanish philology in the Universities in Almería and Barcelona


Other languages he speaks besides Spanish: Catalan, Dutch, English, Estonian


Why learn Spanish? “Spanish, above all, means freedom – freedom to communicate with almost 500 million people in the world and to travel to amazing places in Spain and Latin America.”